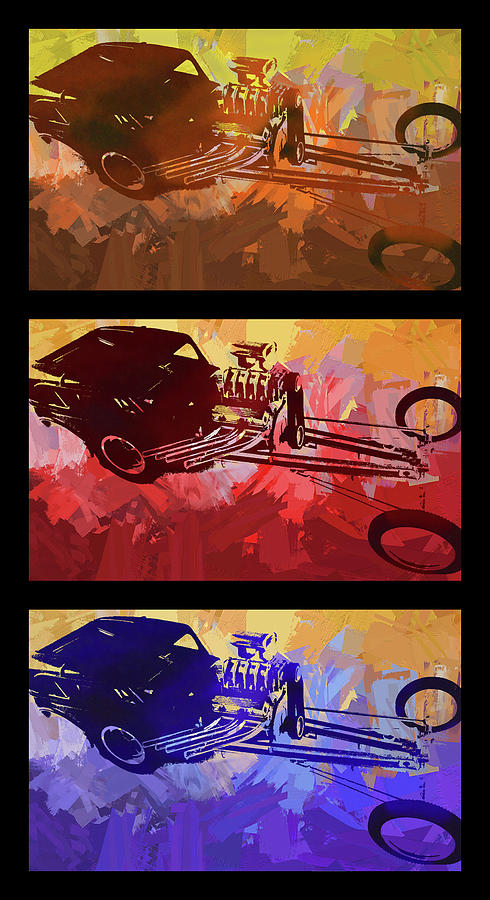 Some would say that the golden years of drag racing were from the late 1950's to the mid 1960's, I can't disagree. Change was happening fast as the sport grew, innovation came nearly daily as track and national records for speed and/or ET fell nearly weekly. One of the top classes was fuel altered which as the class developed became basically just rail dragsters with body shells on them. Those body shells would actually put the altered into one of two different classes, either roadster, or sedan/coupe, the only difference usually being just the body shell, and before long those were just lightweight fiberglass reproductions. One of the most popular bodies for the sedan/coupe class was the American Bantam sedan as represented in this image. The American Bantam was a small car produced in the late 1930's through 1941 that was actually an American version of the English Austin built under license with minor design changes. This body was popular for drag racing because it was very small which made it lightweight and present a smaller frontal area for less wind resistance. Engines were set back as far as possible to improve traction on the very narrow drag racing slicks of the time, this meant the body was set back as well, often the original wheel openings in the body were left intact giving it sort of an odd appearance with the empty wheel opening at the back of the body.

Unfortunately I don't have access to real vintage drag race cars. I do however happen to have a model car collection, even some that were built by a teenager in the 1960's, this image is based on one of those models. I converted a photograph I took of the model into a silhouette, copied it three times and filled them with gradients of dark orange, dark red, and dark blue and then set them against an abstract background of simulated brushstrokes and combined them into a triptych.